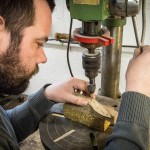 Antoine Faucheux is a cutler in Mayenne.
After working at Thiers in a bicentennial cutlery factory and obtaining a CAP ICC (Cutting and Surgery Instruments), he returned to settle in his home territory in order to establish his business there: the Coutellerie du Maine-Anjou .

Antoine has created a folding knife for the territory of Anjou, as it can be for Laguiole, Thiers and many other regions, this knife is called logically: “L’Anjou”.
He manufactures and offers for sale this knife.
On the basis of “L’Anjou” he proposes courses of knife manufacture sharpening training.
He also realizes a service of sharpening and re-molding in his workshop.
The year 2017 will give birth to a model of table knife and 3 models of kitchen knife.